Denis Perec of Norfolk loads fresh oysters onto the pit during a previous Chuckatuck Ruritan Club Oyster Roast at Kirk Farm on Everets Road. This year’s installment is set for April 8. 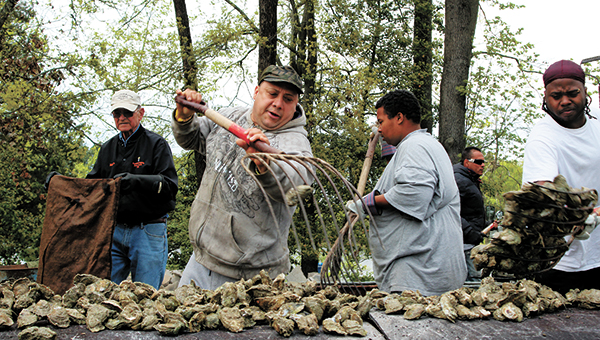 Bringing fresh-roasted mollusks, aromatic clam chowder and good cheer to a picturesque field off Everets Road, Chuckatuck Ruritans are preparing to kick off the spring fundraiser season with their annual oyster roast.

This year’s 39th event will be held at the usual location, Kirk Farm, on Wednesday, April 8.

The event starts with the social beginning at 3 p.m. Then, after they’re roasted beneath damp burlap sacks to mouth-watering perfection, the oysters will be shoveled onto the trestle tables from 4 to 6 p.m.

Event co-chair Kirk Pretlow said he’s been involved in the tradition for “probably 32 or 33 years.”

“It’s an event that a lot of people look forward to, and come to from many different areas around here,” he said.

“It’s something that kicks off the spring, as far as Ruritan events. I think it’s probably the first one. We’ll have 800 to 900 folks.”

The roast is the main fundraiser of the Chuckatuck Ruritan Club, which directs proceeds to community organizations like Scouts, Meals on Wheels, the Nansemond-Suffolk Volunteer Rescue Squad and Chuckatuck Volunteer Fire Department.

“It takes all our Ruritans,” Pretlow said. “We have about 45 (members), and then we also get some help from members of the Chuckatuck fire department. We even have to hire a few folks to help.”

During the two hours, folks will consume about 200 bushels of oysters and 120 gallons of clam chowder, according to Pretlow.

After last year’s passing of former volunteer fire department chief Jerry Saunders, the clam chowder team will be slightly different this year. Pretlow said Chief Saunders’ son, Jay Saunders, will be putting his chowder skills to the test at the event for the first time, joined by three others instead of two previously.

“It’s gone from three to four,” Pretlow said of the chowder team.

He added that Jerry Saunders’ involvement in the event — and in the community generally — will be missed. “He was a man who knew everything going on,” Pretlow said.

Tickets for the oyster roast are $35. In advance — which is preferable for the club, Pretlow said — they’re available from the Pretlow law practice, 200 N. Main St., as well as Saunders Supply on Route 10.

Pretlow said the ticket price had to be raised $5 from past years to cover the increasing costs of staging such an event.

“Most of the guys have been doing what they do for many years,” Kirk Pretlow said of the volunteers who help make the event a success. “They know what to do.”