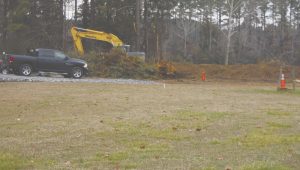 Posted By matthewward On February 3, 2015

On Friday, pipeline is installed behind the Chuckatuck Volunteer Fire Department building. When the projected is completed — by the end of December, if all goes according to plan — it will bring raw water to the Robert G. House Jr. treatment plant from the Western Branch Pump Station on Godwin Boulevard.

A contractor has started laying pipeline in the final phase of a two-phase project to deliver raw water from the Western Branch Pump Station on Godwin Boulevard to the G. Robert House Jr. Water Treatment Plant at Chuckatuck.

The 36-inch pipeline — 22,100 linear feet of it — will be laid alongside Route 10 inside a 25-foot wide easement, from just north of Sack Point Road to the Dominion Virginia Power complex, said Al Moor, the city’s director of public utilities.

From there, Moor said, the pipeline will make a right-hand turn and head cross-country to the treatment plant, basically following the same route as existing pipelines for groundwater wells.

T.A. Sheets, also the contractor on Phase 1, came in with a winning Phase 2 bid of $7.67 million, Moor said, after a $14 million initial estimate by the city.

Moore said the company has already laid about 3,000 feet of pipe at the Lone Star Lakes end of the project, where the water will discharge into the lake directly behind the fire station at Chuckatuck.

“They are working back south,” Moor said.

As the project continues, the southern end of Lone Star Lakes will remain closed for about two weeks, according to a city news release. Other parts of the park are to remain open, observing regular park hours.

Moor said the project is taking a little longer than first expected. “As you go through easement and land acquisition, sometimes it take a little bit longer than we’d hoped,” he said.

The project is currently scheduled for completion by the end of December, Moor said.

Estimated at $3.8 million, Phase 1 of the Western Tidewater Water Authority project involved installing pipe from the Norfolk-owned pump station alongside Route 10 to the southern terminus of Phase 2.

The contract Suffolk has with Norfolk for raw water, to 2048, will deliver 15 million gallons a day to the treatment plant by 2037, Moor said previously.

Suffolk will keep 75 percent of that water and be paid by Isle of Wight for the remainder, he said.

“It’s to help meet our future demand,” Moor said last week. “In the long term, we will (also) be expanding the water treatment plant.”

Article taken from The Suffolk News-Herald – http://www.suffolknewsherald.com
URL to article: