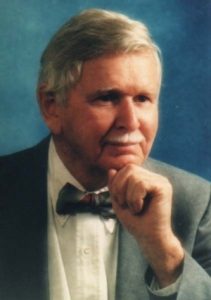 On January 26, 2015, Dr. Arthur Abbitt Kirk, 99, passed away at his home with his family by his side. As an orthopedic surgeon, philanthropist, and a man of many talents he left his mark on the Portsmouth community in many ways. Never a man to seek recognition for himself, he served quietly as a husband, father, Army officer, surgeon, community volunteer. He gave his medical talents and financial support to many causes and individuals both close to home and far away—volunteering in 1968 and on three other occasions for medical field work With Care-Medico in such far flung places as Afghanistan and Indonesia.

Dr. Kirk is predeceased by his beloved wife of 61 years, Marie Lucille Linge Kirk. He is survived by a son, Arthur Russell Kirk and his wife Pamela C. Kirk of Suffolk; a daughter, Ann Marie Kirk-Mendes and her husband Mavilio Jose Mendes of Portsmouth; three grandchildren, Marie Alene Kirk Clunan and her husband John Stuart Clunan of Virginia Beach; Michael Russell Kirk of Nag’s Head, NC; Jeffrey Tew Kirk of Redding, CA; and three great-grandchildren, Fiona Alene Clunan, Christopher James Clunan, and Alexander Brennan Clunan of Virginia Beach, VA. He leaves behind a large extended family in Chuckatuck and the Suffolk area where he was born and raised and worked as a child in his father’s sawmill at Kirk Lumber Company, Inc. During this time he survived the Great Depression and learned an ethic of hard work, saving, and generosity that would remain constant throughout his life.

Dr. Kirk graduated from Chuckatuck High School and attended Virginia Polytechnic Institute, graduating in 1937, with a B.S. in Biology. He graduated from the Medical College of Virginia in 1941, and completed an internship at Walter Reed Armyl Hospital in Washington, D.C. where he specialized in orthopedics. A veteran of World War II, he served as a Major in the Army and commanded a unit that provided medical support for the 82nd Airborne and freed prisoners at the Ludwigslust Concentration Camp in Germany in 1945.

Dr. Kirk began private practice in Portsmouth, VA in 1951, as the first orthopedic surgeon in Portsmouth. This began 43 years of service in which many a person in Portsmouth saw Dr. Kirk for anything from a broken finger to a hurt back. He became known for trying innovative hand repair techniques and disc surgery work and published them in medical journals.

When Dr. Kirk saw a need, great or small, he took steps to meet it. He co-founded the Kirk-Cone Rehabilitation Center, which operated from 1954 to the mid-1970s to provide education to disabled children who were excluded from public schools, and now continues in its mission as Kirk-Cone Rehabilitation Inc. to assist children in need in Chesapeake and Portsmouth. He loved sports and supported the Norcom and Wilson High School football teams and basketball teams as a team doctor and benefactor until the last year of his life.

His philanthropy included being the first donor to the Portsmouth Community Foundation which is now known as the Southeastern Virginia Foundation. He was a major contributor to Eastern Virginia Medical School where he was honored with an Honorary Doctorate, to Old Dominion University, where he gave financial support for a study of flooding in Franklin, Va, as well as a 3, 546 carat blue Topaz which he cut in memory of his son, Bill, as well as a slightly smaller blue topaz he gave to the Smithsonian Institute. He made major contributions to the Maryview Hospital Foundation, the Virginia Sports Hall of Fame and to the Portsmouth-Chesapeake Area Foundation, which supports Kirk-Cone Rehabilitation Inc. He gave many of the gems he cut and mineral specimens he purchased to the Virginia Tech Gem and Mineral Museum.

In addition to his gem cutting, Dr. Kirk was an horticulturalist, developing two camellias recognized by the National Camellia Society, one of which he named the Marie Kirk , after his beloved wife.

Among his many awards Dr. Kirk was most pleased with his being honored as First Citizen of Portsmouth in 2004 at the age of 90 and as Philanthropist of the Year in Hampton Roads in 2014 at the age of 98.

In lieu of flowers, contributions may be made to the Portsmouth-Chesapeake Area Foundation at 5907 West Norfolk Road, Suite 101, Portsmouth, Virginia 23703, or to St. John’s Episcopal Church at 828 Kings Highway, Suffolk, Virginia 23432.

A memorial service will be held on Thursday, January 29, 2015 at 1:30 at R.W. Baker & Co. Funeral Home and Crematory, 509 W. Washington Street, Suffolk, Va. 23434, followed by burial at St. John’s Episcopal Church in Chuckatuck. Condolences may be registered at RWBakerfh.com – See more at:http://www.rwbakerfh.com/obituary/Dr.-Arthur-Abbitt-Kirk/Portsmouth-VA/1475300#sthash.R8sLNq4X.1FFu75uF.dpuf