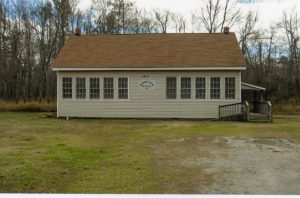 As the Diamond Grove Baptist Church and the Sandy Bottom community began to grow and flourish, the children needed to be formally educated. The parents and other members of the community came together to establish the first school. This school was located directly behind the church. As enrollment grew, a larger building was required, therefore one was erected across the road in front of the church.

The teachers were the same at both schools: Ms. Daisy Ricks, Ms. Clara Banks, and Ms. Bertha Blizzard. The student enrollment outgrew the second building, also. A community committee of citizens contacted the Nansemond County School Board seeking to have an adequate structure built—one that would sufficiently accommodate the growing population. After some time, this dream became a reality. Sandy Bottom Elementary School, grades 1-7, was constructed and remained in existence for many years.

Eventually, Nansemond County School Board deemed it feasible to consolidate the schools in Sandy Bottom, Hobson, and Oakland communities. The new school was located in Oakland and was named Oakland Elementary School to include grades 1-7. Later Oakland Elementary was changed to accommodate grades K-5.

The students said their farewell to Sandy Bottom Elementary School in 1961. Today, 2011, the school remains in good condition and is currently owned and used by the Diamond Grove Baptist Church as its Fellowship Hall.