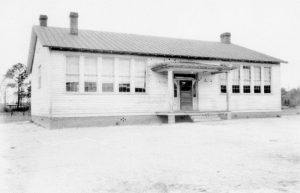 The village of Chuckatuck is fortunate to still have one of its first schools.  The current Oakland Elementary School is built around an earlier Oakland School, a former school for blacks in Chuckatuck.  In addition to serving our young people as a school it also offers after school activities in the community for all ages.  (pics of Oakland School and activities.)

After a conversation with Mrs. Clarice G. Whitfield, the information revealed that there was a one room school for the Black children to attend in Oakland. Mrs. Maude Graves, her mother attended such a school. John Lee Wilson was born in 1917 in Oakland, Nansemond County, Virginia. He attended school until third grade. During that time frame, the school that he, Mrs. Graves, and other children attended was not part of the Nansemond County School system. According to an article in the Virginian Pilot, dated 8-28-97, “New Oakland Elementary School keeps some roots to its history,” in 1929, the Nansemond County School Board built a four room school–Oakland Elementary. This school was opened for the African American children in the Oakland Community. The school had potbelly coal stoves for heat; windows were open and notebook fans were made useful for keeping cool in warm and hot weather. Water was supplied by a pump at Mrs. Bland next door, when the school pump broke down. Eventually, the school hooked up to the community water system.

The school had plenty of clear ground and wooded area close by. The children played games as baseball, hide and seek, running races, bobby jacks, hopscotch, cowboys and Indians dodge ball, jump rope, and other activities. In the early 1950s the Parent Teacher Association designated a committee to go to the school board to ask for playground equipment for the children. The request was granted and a swing, slide and a merry-go-round were installed. A daily exercise done by all of the community children was walking to and from school. Until the new Oakland Elementary school was built, the students went home for lunch or brought a bag lunch to school. On special occasions, the class members would bring hot dogs with all the fixings, potato chips, cookies, kool-aid, and so forth to have a class party. At other times they would bring can milk, sugar, eggs, flavor to make and freeze ice cream (made by Mary Wilson-Copeland).

The classes would give plays for Christmas, school closing, Black History Week Programs, and every school morning began with School Devotions which included Singing, Bible Verses, and Prayer. Since two grades were in the same room, students were able to listen in on the other class lessons. This was done by Sevella Wilson-Barcliff. She was proficient enough to do her class work and that of the class ahead of her and she passed from fourth grade to sixth grade (she was completely tested before such a move was made).

A Special Note: In the four room Oakland Elementary School, Miss Leona Sevella Copeland, daughter of Mrs. Mary Wilson-Copeland, taught a fourth grade class in the same room where her mother was a student in fourth grade.