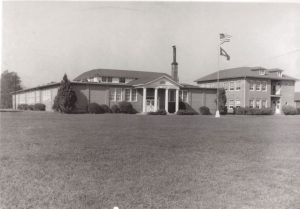 The 1925 annual was professionally printed and contains many pictures by Hamblin’s Studio. The next annual that I’ve seen was hand made for the Class of 1940.

Eleven grades were expanded to twelve grades after the 1957 graduating class.

Mr. Christopher and Mr. Morris were both very strong disciplinarians who stayed in Chuckatuck long enough to mold many young minds. One of those young minds was that of Drex Bradshaw who learned that throwing an eraser was not acceptable in school.  Although Drex was punished by having to throw an eraser from Chuckatuck to Sandy Bottom and back, noting how many times he had thrown the eraser,  it was not his fault, according to Drex, but that of his best friend, Arthur Raine.

While some schools in Virginia closed due to integration in the late 1950s and early 1960s Nansemond County schools remained open.  Students were able to select the school they wanted to attend in the fall of 1965 when Nansemond County started the “Freedom of Choice” program.  However, most schools remained segregated and zoning and bussing were put in effect in the fall of 1972 to achieve full integration as required by law. Integration in the Chuckatuck area was achieved without much fanfare.

The class of 1965 was the last class to graduate from Chuckatuck High School.  John Yeates High School near Driver replaced Chuckatuck in the fall of 1965.  At that time Mr. W. N. Rippey retired with the longest tenure having been with the school since 1927.

The school was then converted into Chuckatuck Middle School which closed in 1977.

The complex was bought by Saunders Supply Company in 1981 and reopened in 1982 as a lumber and hardware supply store.  The gymnasium is used as a warehouse and the cafeteria is used by the City of Suffolk for a branch library.  The early two story school was demolished in 1987.  The community is very appreciative to Mr. Al Saunders and his business partners for their vision that allowed Chuckatuck High School to remain in more than just our memories.