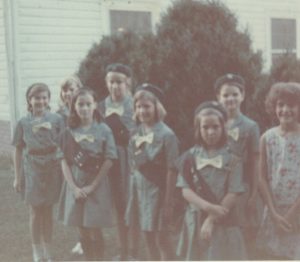 In 1930 Mrs. Harry Lee Cross of Suffolk became Chairman of the Suffolk Girl Scouts.  Within this troop was a young girl by the name of Betty Cross.  This young girl would ultimately become Mrs. Joshua Pretlow and would start her adult Girl Scout activities in 1958 as a troop committee member in Chuckatuck.  She served as troop leader in 1959 and 1960 and in 1663 became president of the Tri-County Girl Scout Council.  There was a merger underway between Tri-County Girl Scout Council and the Virginia Tidewater Chapter to form a new Greater Tidewater Girl Scout Council in 1964 of which Mrs. Pretlow would be the president.   Mrs. Carrie Saunders was a leader and held meetings in her home.  Edna Saunders, Dorothy Bradshaw, Virginia Kelly, Peggy Bradshaw, Mary Jernigan, Betty Glasscock, Lynn Rose, Margie Knight, Margaret Saunders, Kay Pickins, Pam Saunders and Linda Bunch, were leaders keeping the program alive for the many girls to follow. Wesley Chapel Methodist Church was a meeting place for years.  In 1976 Karla Smith from Hobson worked with the girls to earn the boating badge.  Ginny Bagnell from Crittenden worked with the girls for their swimming badge.  Cookies were now being sold for $.50 cents a box up from $.18 cents in 1942.  In 2011 those same cookies will go for $2.50 per box with a couple of additional selections.

In 1996 Johnice Mitchell and Kitty Martin started a troop/group 5563, meeting at Oakland Elementary School and ultimately at the Oakland Christian Church.  The Chuckatuck Ruritan Club and Oakland Christian Church have been long time supporters of the Girl Scouts.  Support has allowed the girls to go on trips and attend events while utilizing the church van for transportation.  Currently there are 25 active members, including ages from Kindergarten to seniors in high school and at times have had as many as 45 members.  There are six levels for the girl scouts:  Daisey, Brownie, Junior, Cadette, Senior, and Ambassador.  Each level has certain requirements for badges, traditions, outdoors activities, and trips.  Ultimately they can achieve a Bronze, Silver, or Gold award.  Some of their activities have been a “Gypsy Hike” that allows the girls to look for a silver star somewhere in the community.  This Silver Star is the secret gypsy sign of a handout for a job well done.  The star was found on the door of Mrs. Gerald Saunders and the results of picking up some sticks was a drink to compliment their lunch which they carried in a “nose bag”.  This is a bag on a stick somewhat like a hobo would carry.  There were Tea Sipping’s, planting of tulip bulbs at the Chuckatuck High School around the flag pole and a winner in the redesign of a new patch for Girl Scouts by a Brownie.  Michelle Martin from Group 5563 designed a patch for the Explorer Suffolk Girl Scout Council of Colonial Coast Patch.  In 1976 Lisa Glasscock was selected to attend a “Wider Opportunity” program called “Saddle Straddle” in Wyoming.  She was selected because of her riding ability and camping experience.  When selected she was a Cadette in Troop 786 in Chuckatuck.

In 2001 eight year old Michelle Martin, a member of Brownie Troop 5563, won a contest to design a new patch for the Explorer Suffolk Girl Scout Council of Colonial Coast.  Michelle as a Brownie had the opportunity to present a patch to members of the Suffolk City Council.  As part of a community project in 1999 Girl Scout Troop 5563 planted a live oak at Oakland Christian Church which is a supporter of the Girl Scouts.

As in any Girl Scout troop the leaders are essential and in the case of the Chuckatuck troop in the early years Mrs. Joshua Pretlow spent a great deal of her time on scouting issues and various committees.  She was awarded the “Thanks Badge”.  In an article in the Suffolk News Herald on October 3, 1963 the following is quoted “Merits of the girl Scout program have long ago been proven.  But the program’s assets could not be gained by the youngsters who participate without active and interested adult leadership.  This need has been filled by Mrs. Pretlow on all levels of the Girl Scout program, along with the many others who have served in similar capacities”.  The local Girl Scouts had a great asset in Camp Matoaka which was located on Lake Prince.  In fact, many of the Girl Scouts from Norfolk who came over by boat were then transported by a hay wagon to the camp.  Camp Matoaka has since been closed and now scouts go to a camp in Franklin.