The next two paragraphs are paraphrased from Wikipedia under Boy Scouts.  The full details of this explanation of the early years of scouting are available at this free web site.

In 1909 a Chicago publisher by the name of Boyce was visiting London, where he learned of the Scouting movement. Soon after his return to the U.S., Boyce incorporated the Boy Scouts of America on February 8, 1910. Two gentlemen, Edgar M. Robinson and Lee F. Hammer, became interested in the nascent BSA movement and convinced Boyce to turn the program over to the YMCA for development in April 1910. Robinson enlisted Seton Beard, Charles Eastman and other prominent leaders in the early youth movements. In January 1911, Robinson turned the movement over to James E. West who became the first Chief Scout Executive and Scouting began to expand in the U.S.

The BSA’s stated purpose at its incorporation in 1910 was “to teach [boys] patriotism, courage, self-reliance, and kindred values.” Later, in 1937, Deputy Chief Scout Executive George J. Fisher expressed the BSA’s mission; “Each generation as it comes to maturity has no more important duty than that of teaching high ideals and proper behavior to the generation which follows.” The current mission statement of the BSA is “to prepare young people to make ethical and moral choices over their lifetimes by instilling in them the values of the Scout Oath and Law.”   The scout oath is as follows:

On my honor, I will do my best To do my duty to God and my country; To obey the Scout Law; To help other people at all times; To keep myself physically strong, mentally awake and morally straight.

In Boy Scouting today there are three divisions known as Cub Scouts, Boy Scouts and the Adventuring Group.  Cub Scouting is available to boys from 5-11 years of age.  Boy Scouts are from 11-18 years of age with a sub area of High Adventure for those 14-18 years of age.  The third group, the adventuring group, has gone co-ed over the past couple of years.  It is available to boys and girls from the age of 13-21 years old.  A sub program to Adventuring is the Sea Scouts which focuses on nautical activities.  Chuckatuck Troop 25 covers each of these areas in its group with the exception of Sea Scouts.

Troop 25 had its official beginning circa 1925.  The Honorable Mills E. Godwin, Jr. remembers going to Camp Waters in Surry, Virginia with the troop in 1928 or 1929.  In 1935 C.C. Johnson was the Scout Master and in 1937 the Chuckatuck Ruritan Club became an official sponsor and has continued that support each year since then.  In 1937 the charter of Troop 25 was rewritten and Stokes Kirk became the Scout Master until 1941 when his service to his country required him to leave.  Joshua Pretlow took over those duties and remained Scout Master until 1943 when the title was passed to W.G. Saunders, Jr. until 1945.  For years the Scout meeting was held over the main store of Saunders Supply.  Between 1955 and 1962, Clyde E. Kelly was the Scout Master.  In 1962 he turned the reins over to John Kirk for the next six years.  Bruce Kirk, Senior patrol leader of the troop, served as acting Scout Master from 1968 when he became an Eagle Scout and remained in that position until replaced by Larry Mizelle in 1969.  Larry Mizelle was Scout Master until 1978 when he was relieved by Parker Howell who served as Scout Master until 1979.   Francis Clements took over until 1980 and remained in that position until William Spence took over in 2000.   George Fly was Scout Master from 2000-2004, Bill Evans 2005 and Tim Warren 2006-2007.  Tracy Stewart from 2008-2010 and the current Scout Master is XXXXXXXX

The following is paraphrased from the web site Wikepedia on Eagle Scouts.

Eagle Scout is the highest rank attainable in the Boy scouting program.  A Scout who attains this rank is called an Eagle Scout or Eagle. Since its introduction in 1911, the Eagle Scout rank has been earned by more than 2 million young men. The title of Eagle Scout is held for life, thus giving rise to the phrase “Once an Eagle, always an Eagle”.

Requirements include earning at least 21 merit badges and demonstrating Scout Spirit through the Boy Scout Oath and Law, service, and leadership. This includes an extensive service project that the Scout plans, organizes, leads and manages. Eagle Scouts are presented with a medal and a badge that visibly recognizes the accomplishments of the Scout.

Troop 25 has a total of 56 Eagle Scouts.  National average is around 2 percent of total population.  However, Troop 25 is well above the national average.  The scout leadership can be credited with giving their individual troop members the necessary stimulus to move up the ladder of success within scouting.

The Norfolk Virginian Pilot cover story on 03-06-08 by Devon Hubbard Sorlie, was titled “Troop 25 gets a Stewart boost”.  Tracy Stewart was praised for his enthusiasm, energy and absolute devotion to Boy Scouting that had earned him Scoutmaster of the Year in January.  “He put the “outing” back in Scouting” explained Colonial Trail District Commissioner George Fly.  George went on to say that “Stewart incorporates so many activities in his program, the Scouts don’t even know they are advancing (in rank) until they get a patch.”  “He lets the boys take credit for their actions.  That’s how he got to be Scoutmaster of the year.”

During an informal meeting with George Fly I asked him to give us a few of his thoughts on his time with the scouts in Chuckatuck.  His association goes back much farther than this as you will see from his comments.

“My earliest memories as a scout start in the city of Portsmouth VA in troop 256. It was through my father’s contact with W.G. Saunders, Sr. via Farmers Feed and Seed in downtown Suffolk that a little troop from Portsmouth, VA was connected with the scouting of Chuckatuck.  W.G. Saunders, Sr. was a great scouter, willing to support scouts when and where he could. He invited my troop to camp on the five mile farm located south of the village of Chuckatuck. Some of the adventures of my life were on that farm during our camping trips. Did you know that if you try to capture a baby pig that its mother will come after you? Yes, one of our rights of becoming a scout was trying to capture a baby pig but never caught one.  One of the great games was capture the flag that were held at that farm. Many a trip my uncle would take us camping and point to the lake and say “There’s your breakfast, lunch, and dinner”. Have you ever eaten fresh water fish with no salt? It is an acquired taste. We pulled up sassafras roots and boiled them to make what we call “Sassafras Tea”. My fondest memory of scouting on the five mile farm was one winter camp I think in 1971, we retired for the night with a lite rain falling and it was cold. When we woke up it was like being in a winter wonderland. All the trees were frozen with ice. Our tents were frozen, equipment, shoes, (I had left my mine outside my tent), no fire, cold food, but what a sight. Bill Saunders, Jr. had to come and get us out with his tractor.

I was a scout from 1966 to 1976 including cub scouts. I took a leave from scouting from 1976 until 1996 when my twin sons asked if they could join the Cub Scout Pack. That pack was Pack 25 located here in Chuckatuck. Billy Gardner was the Cub Master at the time and Connie Branden was his assistant. To this day, my favorite time as an adult scouter was the Tiger Cub years with my twin sons Robert and William Fly. No matter what activity or event you were a hero in their eyes. I was asked to be Cub Master in 1996 taking over the top job from Billy Gardner.  In the beginning of my tenure as Cub Master, our membership was about thirty cubs, small enough to hold the Pack Meeting at Wesley Chapel Church. By the end of 1997 we had grown to over 75 Cub Scouts and had moved to Oakland Church. By the end of my years has Cub Master, Pack 25 had moved to Oakland School for its meetings with over 130 Cubs Scouts.  We sent one of the Webelos dens to restart troop 42 in Crittenden Va. We split the pack, starting a pack at the King’s Fork Ruritan Club, and still had over 75 Cub Scouts. Jim Martin relieved me as Cub Master. In 2000 Bill Spence asked if I was ready to take his place as Scout Master because he wanted to start a Venture Crew. I said yes and in 2001 I became Scout Master of Troop 25.

Many a boy has passed through Troop 25 over the years, many have remained in the community and some have left but they all take the pride of saying “I was a scout in Chuckatuck”. We grew the troop a point were it was unmanageable and an impact on our camping areas. So we started to send boys who lived outside of the greater Chuckatuck area to troop 16 in Driver, troop 36 Carrollton, troop 3 Smithfield and troop 7 Smithfield. We produced approximately 17 eagle scouts, represented at the 2001 and 2005 National Jamboree, Order of the Arrow and had many leaders assigned positions at the District and Council level position. 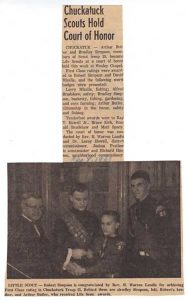