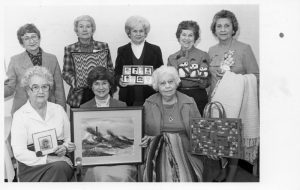 A book club, meeting in a log cabin on the Godwin estate in Chuckatuck, Virginia, was the actual beginning of the organization we know today as the Junto Woman’s Club.  In November of 1924 twelve Chuckatuck women met to organize a book club with the purpose of promoting a circulating library for the community.  The book club continued until early 1926 when the focus was changed to a literary club whose purpose would be to promote individual and civic betterment.  At this time a constitution and by-laws were adopted.  Dues were set at five cents per month with and initiation fee of fifty cents.  The first president was Mrs. David Corbell Cotton who served from 1926-1927.  Through her efforts much interest was aroused in public health issues.

The first permanent meeting room was a one-room cabin of the colonial period owned by Mills Godwin (Father of Governor Mills E. Godwin).  A name was needed and “Junto” was adopted.  It was Junto that Benjamin Franklin and his literary friends founded in 1727 as a society to stimulate their literaty activities.

In February of 1927, Mrs. Henry S. Eley of Suffolk, then the Director of the Virginia Federation of Women’s Clubs, spoke before the Junto Club on the subject of “Federation and its Advantages”.  The visitor’s address was acclaimed by immediate action to federate with the General Federation of Women’s Clubs.  In May of 1927 the Junto Club received its charter.  The original group then invited ladies from the neighboring communities of Crittenden and Eclipse to join them.  The club quickly outgrew its meeting place and moved to the larger quarters of the Chuckatuck Masonic Lodge #77.  The Junto Club reciprocated this kindness by completely remodeling and renovating the entire spacious lower floor of the building resulting in a kitchen, powder room, new piano and a place for books which it was hoped would become a circulating library.  Regrettably, the library was a failure.  With patience, the Club would succeed in this worthy endeavor but it was not to happen soon—not for over 50 years as events turned out.

The Club grew to a membership of 51 during the thirties.  The focus was on Public Health issues with lectures given by distinguished physicians.  Departmental work stressing educational and garden activities was taken on.

On October 17, 1941 the Junto Club hosted the Seventh District Convention at Benn’s Church.  The Second World War was less than two months ahead.  The trying war years made rigid demands upon everyone.  The Club held together and made a fine contribution toward the war effort.  Scrap iron and metal were collected; each member contributed fifty cents toward the Red Cross ambulance which was sponsored by the Seventh District (now Southside District).  The Club observed its 21st birthday in the fall of 1945 with 50 members.  During the year, through its sponsorship, the Junto Club sold war bonds totaling $4500.00

On the 25th anniversary of federation in 1952, the club attained distinction in uniting four communities—Chuckatuck, Crittenden/Eclipse, King’s Fork and Everets under our motto “Our Community – a Better Place to Live”.

Junto Woman’s Club began its 50th anniversary of Federation in the same spirit of community involvement by forming a committee to study the means of upgrading telephone service in Crittenden.  Junto was a leader in the successful effort to petition the State Corporation Commission to extend telephone service for the Crittenden area residents.  Establishment of this service entitled residents to call downtown Suffolk, their seat of city government, toll-free for the first time.

In 1983 there was a request from a board member of the Morgan Memorial Library in Suffolk to establish a library station in Chuckatuck with a goal of a collection of 2000 books.  One of our members and her husband, Georgia Anne and T. A. Saunders, donated the needed location at the Saunders Supply Company.  The Morgan Memorial Library helped volunteers organize and catalogue 600 books.  Seven members from the Club volunteered untold hours towards the opening of the new library station.  On April 26, 1983 the Chuckatuck Library opened at 2:00 p.m. with thirty-one patrons.  Our club’s fifty year old dream had finally been realized.

The Junto Woman’s Club continues to enjoy successful years.  Of our sixty-three members, each one serves in a Department and participates fully with our three major fundraisers. In the past year our Fashion Show/Luncheon in both the spring and the fall raised approximately $2800.  The Second Annual Spring Fling raised an additional $2800 to fund the Junto Education Scholarship which is given to a senior from the two high schools in our immediate area, Meals on Wheels donation of $500, donations to two local Fire Departments, two Girl Scout troops, the new Suffolk Center for Cultural Arts and the Suffolk Red Cross. This allows us to support the state projects and other needy organizations as well.

The Spring Fling was held at a member’s home which was selected for its historical significance and interest to the community.  This provided another opportunity for several members to display their artistic talents and to earn money for the club’s charities.  It was a marked success.  The annual club Arts & Crafts Show has grown in scope each year as it displays the extent of our talented members.

The annual Christmas Tea, which is sponsored by the board, is an opportunity for the club to showcase our organization and invite prospective members to hear holiday music and enjoy delicious refreshments.  Once again, our club sponsored a family for Christmas.  Members donated over $500 to buy gifts, clothing and food for a family selected by the Salvation Army.  Dolls and toy bears are dressed by our members for the Salvation Army each year.

Our programs ranged from talks on safety, conservation and civic affairs to one program by a retired college professor discussing his first book which was published when he was in college.  Our club continues its involvement with several projects. We continue to supply volunteers to the Chuckatuck Library.  We grant requests for items for the elementary schools.  Soup labels and used printer cartridges are collected and donated to an elementary school in the area.  The Junto Book Club has an active coterie of eighteen members who conduct programs each month with speakers and book reviews   The Junto Bridge Club is another area of interest where members may join and benefit from an experienced teacher, one of our members.  This group of twenty-one members meets twice a month. In addition to contributing money to the Suffolk Meals on Wheels organization, we have a team of members that deliver meals to recipients every Thursday.  Twice in the past year we had a shower for the Genieve Shelter, a home for abused women and children.  Member donated non-perishable foods, paper products, and toilet articles and used cell phones.  We also supported the shelter monetarily.

As it has for over 80 years, the Junto Woman’s Club continues to provide many opportunities for fellowship, building bonds with the communities in North Suffolk, and gaining leadership experience within the club.

.  The above information was provided by Mrs. Jennifer Bradshaw.