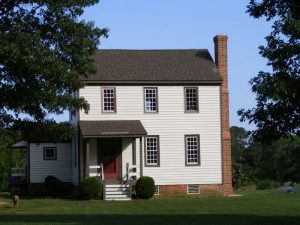 The house was built in the 1780’s, with good evidence that it was constructed in 1784 by John Godwin.  The architectural style is a transition from Colonial to Federal.  The house was owned through most of the 1800’s by the Lawrence family, and the surrounding farm has been known as “Cotton Plains” at least since their time here.  Joseph and Shelley Barlow started reconstruction of the house in 1996 and moved in 2000.

The majority of the floors, windows, hinges and woodwork are original to the house.  The house had not been occupied for at least 60 years prior to the renovation, and had never had electricity or plumbing.  The house originally had two chimneys with six working fireplaces which were removed, probably in the 1940’s and replaced with a central chimney to accommodate coal stoves.

The main hall would have served many purposes in the 1800’s.  This 30 foot long passage, with the large front and back doors open for ventilation, would have served as a work area in the summertime.  The front and rear doors with glass transoms above are original to the house.  The double doors are typical of this period.  Since final arrangements for loved ones were handled by families at home, it’s thought that the wide passage was to allow the moving of coffins in and out of the house.

The parlor, the largest and most formal room of the house, would have been used for multiple purposes, including business meetings, entertaining guests, and various household chores, including spinning.  Artifacts found in the house during the renovation include a broken pane of glass with the signature of John Godwin and a date of May 1784, a flint-lock pistol with powder horn, a child’s shoe, the bottom of a wine bottle, an ink well and other items.  Names etched on an old window in the Lawrence home are those of:

The current kitchen was originally a dining room used by the family for every day meals.  The small door to the left of the sink was likely used to pass food and firewood into the room from outside.  The original kitchen was a separate building located approximately where the grape arbor is today.  There is evidence from old letters that this room was used by Elizabeth Lawrence as her bedroom in her old age and that the family used another dining room located in the basement during this time.

A 2000 addition on the back replaced a 1940’s addition that included a small room and a back porch.  Every effort was made to take advantage of the beautiful horseshoe view of the Chuckatuck Creek.  Cotton Plains Farm borders the Chuckatuck Creek and is part of a peninsula of land originally given in a land grant to the Godwin family.

The upstairs was originally four bedrooms, two with fireplaces and two without.  In the 1800s, this space would have been sleeping quarters for Robert and Elizabeth Lawrence and their 3 sons and 3 daughters.  It is believed that a door in this room opened to an addition possibly added to accommodate Sarah Lawrence Godwin who moved back to her parents’ home with her children after the death of her husband.  Her signature can be seen on two doors in these rooms.