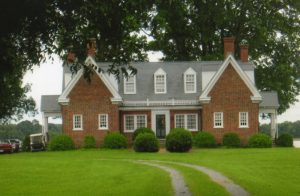 Near Chuckatuck overlooking the Nansemond River, is the handsome brick home known as Pembroke which was built in 1701 by an English seaman, “Captain” Jack, who named the estate for the Earl of Pembroke.   The property was a grant from the King of England, approximately 650 acres which stretched from the Nansemond River to Reid’s Ferry.   Captain Jack mysteriously disappeared and his caretaker, Patrick Wilkinson, obtained the estate.  His descendants owned the land until 1830 when it was purchased by James Hunter Godwin.

The estate was occupied by many before Mr. and Mrs. Frank Warrington purchased the land in 1940 from Horace Philips of North Carolina.  The property consisted of approximately 330 acres.  The  Warringtons found that the house was selected and listed in the Library of Congress as possessing exceptional historic and architectural interest and being worthy of careful preservation for the benefit of future generations.   The house is one of two remaining U shaped pre- revolutionary houses in the United States.

During the War of 1812 the British burned the house, destroying much of the interior woodwork.   Bullet holes from the Civil War are visible and cannon balls were found in the façade facing the Nansemond River.

Restoration by the Warringtons was conducted from 1950 to 1952, and today it is a beautiful home with the original features preserved.   George W. Lewis, colonial restoration builder, was contracted to restore Pembroke.  The furnishings were carefully chosen period pieces by Mrs. Frank Warrington.

The estate was inherited in 1990 by Mrs. Marshall (Jean) Cox from her aunt, Mrs. Myrtle Warrington.   The estate is beautifully maintained by Mrs. Cox, a gracious lady, who cherishes her home.   The estate also contains homes of Jean Cox’s two sons and daughter.