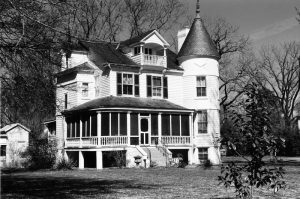 The tract of land upon which the Godwin-Knight House stands was acquired by the Godwin family at least as early as the late 18th century, when Henry Godwin owned 441 acres in the vicinity of Chuckatuck.  In 1815 his estate was divided, and H.P. Godwin received 281 acres.  He sold the tract to Joseph Godwin in 1825, and Joseph, in turn, sold it to Jennette Godwin in 1834.  Jennette subdivided her property in 1856, selling off five adjoining lots, ranging in size from one acre to an acre and a half.  The lots were laid out on the eastern side of Chuckatuck, along present-day Route 125.  One of the purchasers was Edward F. Wicks.  He bought a 1 ½ acre lot and immediately built a 4 story, Federal style double-pile, three-bay, side-passage-plan, frame dwelling.  Over the next two years, other lot owners built houses that closely resembled his.

Wicks owned the property until 1861, when he sold it to Henry L. Tynes.  Tynes sold the tract in 1867 to Annie Glover; thereafter, the property changed hands several times until Lulie E. Pitt acquired it in 1897 from Matthew W. Crumpler.  Pitt sold it the next year to Charles B. Godwin, and about 1900 Godwin carried out the Queen Anne style alterations to the house.  Godwin added a tower, wrap-around porch, encaustic tile vestibule, plaster embellishments in the front parlor, and mantels, woodwork, stained glass windows and stairs typical of the period.

Godwin lived in the house until he sold it in 1925 to his nephew, Mills Edwin Godwin, Sr.  This Godwin, who was a farmer and a member of the Nansemond County School Board and the Board of Supervisors, moved his family into the house in the fall of 1927.  Among his family were four children, including Mills E Godwin, Jr. and Mildred Elizabeth Godwin.  The younger Mills Godwin lived in the house until his marriage to Katherine Thomas Beale in 1940.  Upon the death of the elder Mills Godwin in 1946, possession of the house passed to his daughters, Mildred Godwin Knight and Leah Godwin Keith.  Mrs. Knight purchased her sister’s share in the property.  The house was bought by Paul and Sharon Wilson Krumpe from Mrs. Knight in August, 1992.

As a member of the Board of Supervisors Mr. Godwin was responsible for keeping the dirt roads repaired.  The barn is still standing where he kept the mules and equipment used for this purpose.