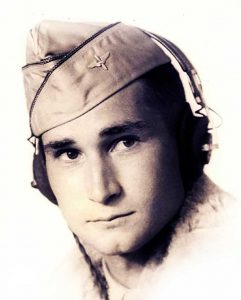 Frank Alma Spady, Jr., 94, died peacefully at his home in Eclipse, Virginia, on Friday, February 8, 2013, surrounded by his family and with his wife of 66 years, Katherine Louise Barden Spady, at his side. Born in Chuckatuck, Virginia on October 3, 1918 to Frank Alma Spady, Sr. and Maggie Mae Pitt Spady, he attended Chuckatuck Elementary and High School. After graduation in 1937, he worked in the Newport News Shipyard until he volunteered for military service on July 15, 1942.

He first served in the War Department Service Group’s Motor Pool in Washington D.C., and then began flight training on February 1, 1943. His first mission, as co-pilot of “The Flying Jackass” was June 6, 1944, D-Day. During a mission on August 13, 1944, he took flack in his leg and was hospitalized in England, but due to experimental surgery, after a brief recuperation, he was back in the air. On November 26, 1944, while he was flying his 25th mission, his plane was shot down over Misburg, near Hannover, Germany. He was captured and held as a POW in Stalag Luft 1 in Barth, Germany until April 30, 1945, when the Germans abandoned the camp to the Soviets. While a POW, Spady had a chance encounter with an architect, who was passing the time by teaching rudiments of his craft to some of the other prisoners; Spady joined the classes and realized he had found his life’s work.

After the war, Spady returned to the Newport News Shipyard. While there, some friends arranged a blind date on which he met his future wife. Frank and Katherine Spady were married on June 15, 1946. Within a few years, financed by the GI Bill, Spady began studying architecture through the International Correspondence School, including in-class training at the Norfolk Division of William and Mary. In 1955, he simultaneously passed the architectural qualifying exams in Virginia, North Carolina, and South Carolina and moved his wife and three children to North Augusta, GA, where he began his work in architecture.

He brought his family (expanded by one) back to Virginia in 1958 and opened his own architectural practice in Chuckatuck in March, 1959. Around the time his youngest son was born in 1960, he moved his office to Suffolk, where he remained in practice for the greater part of the next four decades. He was a member of the American Institute of Architects. His contribution to the cityscapes of Suffolk, Nansemond County, and Isle of Wight County is one of the major achievements of his life.

Spady was a lifelong member of Wesley Chapel Methodist Church, where he served in various capacities, including the Board of Directors. On the occasion of the church’s 100th anniversary, he and his wife wrote and published a series of articles on the church’s history. At the time of his death, he was the oldest member of the congregation. An avid student of local history, Spady passed along the history and traditions of the village where he was born and was one of several longtime residents interviewed for “Chuckatuck: Crossroads in Time.”

Spady served on the Suffolk Redevelopment and Housing Authority, the Board of Zoning Appeals (for Suffolk and Isle of Wight County), and the board of directors for the Tri-County Occupational Center. He was a member of the Suffolk Rotary Club and the Chuckatuck Ruritan Club and volunteered for numerous organizations, including the Boy Scouts of America.

A funeral service will be conducted at 11:00 am on Monday, February 11, 2013 at Wesley Chapel United Methodist Church by the Rev. Ileana R. Rosario with burial in the church cemetery. The family will receive friends in the R.W. Baker & Co. Funeral Home and Crematory, 509 W. Washington Street, Suffolk, on Sunday, February 10, 2013 from 3:00 to 5:00 pm. Condolences may be registered at www.rwbakerfh.com. In lieu of flowers, the family asks that donations be made to Wesley Chapel Methodist Church in Chuckatuck or to the American Cancer Society.