A prominent Chuckatuck native who served the community in many capacities died last week.

Dr. Arthur Abbitt Kirk died in his home on Jan. 26 at the age of 99. His family started Kirk Lumber, but he didn’t feel like he needed to go into the family business, said his daughter, Ann Kirk-Mendes.

“My father realized his brother was going to take it over, so he decided to go into medicine,” she said. 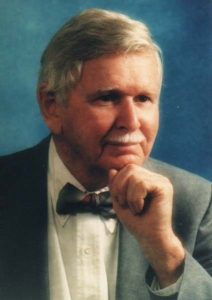 Kirk graduated from Chuckatuck High School and earned a Bachelor of Science degree in biology at Virginia Tech. In 1941, he graduated from the Medical College of Virginia and completed an internship at Walter Reed Army Hospital. He entered the war effort and served as a major, commanding a unit that provided medical support for the 82nd Airborne and freed prisoners at the Ludwigslust concentration camp in Germany.

Kirk-Mendes said her father only starting talking about the war in the last two or three years of his life.

“He never talked about it at all until just the last couple of years,” she said. “then he started telling us stories. It was kind of interesting.”

He began his orthopedic surgery practice in Portsmouth in 1951 and ran it for 43 years. He became known for trying innovative techniques and publishing them in medical journals.

He was heavily involved in the community and in philanthropy. He supported local football and basketball teams as a team doctor and benefactor, co-founded the Kirk-Cone Rehabilitation Center, which operated from 1954 to the mid-1970s to provide education to disabled students who had been excluded from public schools and now continues its mission assisting children in need. He gave plentifully to community foundations, universities, museums and more.

“He made an impact on the community and beyond,” Kirk-Mendes said. “I don’t think you run into many people that do that. He never really wanted any credit for any of it. He just wanted to make sure things got taken care of, but he didn’t want or need the recognition.”

Among Kirk’s many hobbies, he enjoyed gem cutting and developed two new varieties of camellia that were recognized by the Virginia Camellia Society.

“He had so many talents, and he was so unassuming with all of them,” Kirk-Mendes said.

Kirk-Mendes said Kirk was among five cousins that were all in their 90s at one time. Now, only one woman who is 97 remains.

On his birthday earlier in January, Kirk-Mendes’ niece made a birthday cake for him and put 99 candles on it.

“It was like a torch,” she said. They had to pick off the melted wax before they could eat it.

“I think he was happy that we were all there with him,” she said.