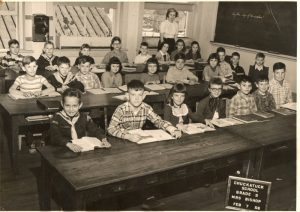 The original Chuckatuck School is believed to have been built between 1890 and 1900.  The Biennial Report of the Superintendent of Public Instruction of the Commonwealth of Virginia for the School Years 1903-1904 and 1904-1905listed the Chuckatuck Graded School as a “Public Graded School Teaching Some High School Branches.”  The principal in 1905 was Mrs. Kate S. Byrd.  This older building once served area students in all grades who often arrived by horse and buggy, housing their horses in a stable at the school.  Ercile Beale Haughwout said she and her siblings would carry horse feed in the cart for the middle of the day.

In an effort to show modes of transportation for early students we quote from an article published by the Daily Press, May 7, 1961 about the retirement of Lucien Hall, Isle of Wight superintendent for 40 years.  “The first bus or truck used, in 1917, was a rented vehicle and the first modern bus was purchased in 1927.  Previously wagons were used.  The “kid wagons” were canvas topped farm vehicles drawn by one auto or two teams transporting up to 20 students”. We imagine Nansemond County would have used similar vehicles.

Of course, many children did not have the luxury of riding to school. I’ve been told of students who walked from near Longview to Chuckatuck, taking a short cut across the ravine between what is now Longview Drive and Route 10.  Often paths from the homes on the rivers and creeks were very long and children had to walk to the highway to catch the bus.  I was told of little Marion Saunders, CHS Class of 1925, keeping her school shoes in a hollow of a tree near what is now Everets Road so she would have clean shoes to put on after walking from her family home on Everets Creek. Up until the 1950s it was not uncommon for students to remain at home to work on the farms during part of the school year.  In 1943 there were two freshman classes, but only one class for each of the upper classes, mainly because the older students were old enough to go to work.  Even in the 1950s Nansemond County buses still had to travel over many dirt roads.  It was not uncommon for  classes to be dismissed early on a rainy day because of concerns about the safety of the children.

The following is quoted from the journal of Stokes Kirk.  “While I was in high school at Chuckatuck, we had very good teachers – F. H. (“Cutie”) Christopher, Miss Ames (sister of Ed Ames), Miss Shreves and Miss Douglas.  Some of the teachers roomed with the Dr. L. L. Eley’s.  The school buses (three) were driven by students.  W. G. Saunders, Jr. drove the first bus from the Everets area to Chuckatuck.  It was no more than a flat bed truck with side and top and benches.  Later Bus #2 was bought by the school board and was driven by a Spivey girl from Milner’s Neck.  Evelyn Saunders drove it during the school year 1927-28.  1928-29, I drove the bus until December when I broke my arm trying to crank it.  I lost about three weeks.  Dad put a starter on it out of his own pocket and I had no more trouble.  The 1929 Chuckatuck graduating class had two girls – Mary Holland and Mildred Godwin, seven boys – Alec Moore, Charles Gwaltney, Richard Rhodes, Norman Carson, Jack Gayle, Ray Furman and me.”