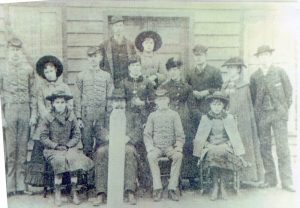 James Jasper Phillips was a graduate of the Virginia Military Institute’s Class of 1853.  He had worked there for six months after graduation as an assistant math professor and went on to teach for a short time at the Glebe School in Norfolk Country.  In June 1854 he started the Chuckatuck Military Academy with 28 males and 20 females.  He adopted the demerit system of VMI “as near as it can be applied to a school like mine and…works like a charm.”  Males were uniformed in military cadet gray in a style that appears to be a combination of the VMI class and dress uniforms of the period.  The school was especially known for the female students as the Chuckatuck Male and Female Institute.  In turn you will see references to the school historically as the Chuckatuck Military Institute as well.

In January 1857 the school became all males, but in the fall 1857 until the June of 1859 the school under James Phillips leadership as Principal was operated as a girls’ school.  The school was called the Chuckatuck Female Institute and was housed in the Masonic Hall which James Phillips had purchased.  He was assisted by a Miss Powell and a Miss Cate, “ladies of distinguished ability, experience and popularity.”  The school was supported by the library of James Phillips and a demerit system to maintain “good order and strict discipline.”  According to a letter to the Virginia Military Institute superintendent, Phillips found himself in financial problems and reopened the school as a female boarding school which he stated was needed in the area and would be financially successful.  (Chuckatuck Female Institute, 1857, pp. 1,6-7).

On June 26, 1859 the school resumed as a military school and operated as such until approximately May 1861.  The Civil War ended the school’s operation with its principal, James Phillips, enlisting as Captain of Chuckatuck Light Artillery Battery, which later became F Company 9th Virginia Infantry Regiment.

The effectiveness of the education provided by the schools is reflected in several ways.  First according to the Virginia Research Center for Archaeology of Virginia the Chuckatuck Male and Female Institute made the town into an “education center.” (Virginia Research Center for Archaeology, 1991 p. 11).  In 1857, graduates were sent to West Point, Lynchburg College and Virginia Military Institute.  Second, an example of its graduates included Richard L. Williams, a member of the Yale Class of 1863 who later became a math professor at Starville Female Institute in Texas.  Other graduates known to have gone to Virginia Military Institute’ Class of 1860 are Oliver H. Butts, Walter A. Lawrence, Charles F. Urquhart and Joseph Boykin Whitehead.  Several other members of the same Chuckatuck graduating class we know only by last names: Murfee, Durfleet, McAlister and Richardson.  Sadly, Walter A. Lawrence, Richard L. Williams and Charles F. Urquhart all died in Confederate Military service during the war.

James Phillips rose to Colonel and commander of the 9th Virginia.  He was wounded twice during Picket’s Charge at Gettysburg, and captured at the last battle of the Civil War, the Battle of Saylor’s Creek.  After the war he was a very successful businessman, moved to New York and was the first President of the National League of commission Merchants of the United States and became the President of New York Board of Trade.  In a letter to VMI he was described as “a man and a soldier who possessed great personal magnetism.  Gallant soldier, upright merchant, courteous, cultivated gentleman and scholar, pure in heart, clear in speech, fearing none but God…” (Phillips, L.E., 1908)