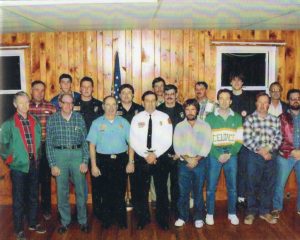 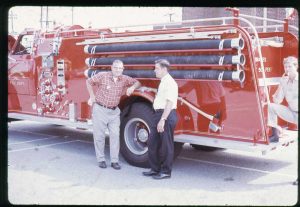 The majority of the information in this chapter has been taken from publications put together by Emma Mae Kelly in the 1960/70s and discussions with Jerry Saunders, current Assistant Chief of the Volunteer Fire Department. The publications by Emma Mae Kelly are available at the GCHF and will be part of the media files available for review. Every person who reads Chuckatuck:Crossroads in Times should avail themselves of these materials as they contain a great deal of information about the fire department and the local community.

In the early years of Chuckatuck there were a number of fires within the confines of the GCH area that needed fire department attention which had to come from either the cities of Suffolk or Smithfield. Each of these were about 10 miles from the center of the GCH area. Between 1917-1921 the former Colonel Phillips Military School, at that time the residence of Corbell Cotten, burned and a bucket brigade was used, but unsuccessfully. In 1917 the L.L. Eley home burned to the ground with only a well on the premises to fight the fire. In 1927 two barns on the land that is now the location of the old Spady home burned with the Suffolk Fire Department in attendance. In 1933 Dr. F.A Morrison’s home (behind Kitty’s Beauty Salon) burned to the ground. We believe this to be the ante-bellum home of the Ramseys, across the street from the Moore home. The Suffolk fire department worked to hold the fire to one home. In 1934 the Hodsden home near Wills Corner was destroyed by a late night fire. The Suffolk fire department did not respond when called due to some conflict between the City Council and Nansemond Board of Supervisors. A letter from Mr. Hodsen to the Suffolk News-Herald (on file at GCHF) revealed lots of help from locals, but none from the Suffolk fire department for a 6-10 foot ladder or some chemicals. Results were a total loss of a beautiful home known as “Concord”. It was not until 1950 that an agreement was reached in the perennial disagreement between the City of Suffolk and the Nansemond County Board of Supervisors that a fee of $50.00 for each fire department call in the County territory would be paid. In 1935 the B.W. Godwin saw mill was destroyed in its entirety with help coming from members of Chuckatuck High School in a bucket brigade and the Suffolk Fire Department. In 1940 the grain barn at Pembroke burned. Although Smithfield responded, when they got to Chuckatuck they were told the fire was out so they returned to Smithfield only to be called again and returned and stood by the fire the rest of the night. The barn was a total loss. In 1945 Chuckatuck High School library burned with students throwing books out of the windows and ultimately the Suffolk Fire Department arrived to put out the fire. In 1951 Kirk Lumber Company had a fire with the Suffolk Fire Department responding. In 1954 P.D. Pruden at Everets Bridge had a fire and the Suffolk Fire Department responded.

It was at this time that Mr. Bill Harvell got the idea that Chuckatuck needed a fire department so he approached Mr. J.R. Kirk for help. The Chuckatuck Volunteer Fire Department (CVFD) had its beginning in 1954 with the purchase/donation of a 1942 Maxim fire truck by Mr. Kirk. This truck came from Langely AFB as surplus and would be more than acceptable once it was outfitted with all of the essential equipment normally used on a fire engine. The engine was stored in the Spady garage until a fire house could be constructed.

In early 1955 there was a house fire on the lane next to Wesley Chapel Church that took the lives of five children trapped in the upstairs bedrooms. The house, one of three along that road, all owned by Lone Star Cement Corp for Lone Star employees, was a small two story house that housed the family of Mr. Robert Eley, a Lone Star employee. The origination of the fire was such that once outside no one could get back into the house to rescue the children. Some of them could be seen at the window but screen wire tacked on the outside was a determent to escape. Arthur Joyner working on the drag line very close by observed the fire and notified Mr. Harvey Saunders, Sr. Mr. Staylor, the superintendent, and Mr. Archie Fronfelter, drag line operator, lived very close to this area but Lone Star Cement Corp had no external fire fighting capability. The CVFD was not notified; however they could have responded within a few minutes if the volunteers were notified. Smithfield responded and kept the next home of Booker T. Chapman sprayed with water to protect it from the fire. Due to the house construction the fire spread rapidly and the house was basically destroyed in its entirety before Smithfield arrived. The oldest child in this family had drowned in the Marl Hole several months before the fire which caused “No Trespassing” signs to be placed at all entrances to the pits. This was the first and only drowning in the Marl holes that we know of. Note: This writer lived just a few houses away and remembers the fire as if it were yesterday. The fire and smell associated with the deaths will always be foremost in my mind. This was a crowning blow for Mr. Eley having lost all of his children in these two instances.

Although the fire house was being built on land sold to the group by Dr. L.L. Eley, this fire may have been the catalyst to get the CVFD building completed as soon as possible. Housed in the Spady  garage with no heat the fire truck could not be filled with water for fear of freezing in the winter thus the need for a new firehouse. The Ladies Auxiliary of the fire department held bazaars and the Chuckatuck Ruritan Club made donations to support their efforts. Richard A. Davis was president of the Chuckatuck Ruritan Club at the time and was active in the organization of the CVFD. The Ruritan Club has been most active in donations to the organization on a yearly basis since its inception. Fire Department dances and fund raisers such as the semi annual fish fries have become a must “go to” event each year and have provided significant financial support for this volunteer organization. They will serve 1500-2000 meals at any given, all you can eat, event. Al Saunders was Chief from 1954-1963 at which time John Kelly was elected. John served as Chief until 1986. Jerry Saunders until 2002 and Greg Parsons from 2002 -.

Many of those living in and around Chuckatuck and the surrounding communities have been involved in the fire department in one way or another. The list of those who have volunteered their services is long and comprehensive. The original list of charter members in 1955, founding fathers, have all passed away except for Al Saunders. The 1956 membership list has only two members still living today, that being Al Saunders and Jerry Saunders. There are members who have been with the department since its inception. For example, Jerry Saunders has been an active member of the department for over 55 years, was Chief for 16 years and is currently the Asst. Chief. Alex Winslow joined in 1957 and has also been active ever since. Vernon Gayle has been with the department since 1958 and remains active today. There are others who have moved to an inactive status due to health reasons such as Al Saunders who was the first Chief. In 1997 the new fire station was dedicated in its current location, to provide more capabilities and space as the city continued to grow. Through all of these years it still remains a Volunteer Fire Department and will respond to any situation as fast as the paid units within the city.

New equipment has been purchased over the years and when passing through Chuckatuck you will see the new fire house and all of the equipment on display and ready to roll. Limited personnel are on site with many volunteers in the communities connected by beepers and land lines ready to move on a moments notice. In every respect the CVFD is a well organized, outstanding volunteer group that responds in a rapid fashion when needed. This station will respond to an average of 300 calls per year and support the other local and city fire departments when necessary.