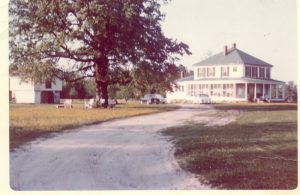 Henry Pruden, great grandfather of Deborah Pruden Powell, bought the farm in 1882 from John Baker and built the house for his family of two adults and six children. It was a classic “two on two” house with a wide hall downstairs, two rooms and small box rooms were upstairs. The kitchen was a separate building and sat to the side of the main house.  An original house was moved to the property and torn down in the early fifties.

The new house, built in approximately 1900, had no plumbing or central heating. Each room had a fireplace flush with the wall and the chimneys were built on the outside of the house. There were small porches on the front and back of the house. The porch facing the Chuckatuck Creek was decorated with lots of curlicues and gingerbread trim, the porch facing the lane was plain. The house was constructed of pegs and square head nails, the walls were lath with mud between the slats, covered with rough horsehair plaster. The stairs were narrow and steep.

The outside of the house was covered with wide rough wood planks. The windows were classic six on six which did not fit well.  The roof was tin.  At some point a breezeway was built between the house and kitchen. A pantry was added to the kitchen and the front porch extended across the kitchen. Later the breezeway was enclosed and the room was used as a dining room.

Henry’s daughter, Ethel, and her husband, Stanley, moved into the farm house in 1916 after the death of her father and mother.  Stanley took over the farm. Their children, Wilson and Vernell, were both born there.  The old house fell into disrepair during the depression.  When Wilson Pruden married in 1946 he renovated the house and moved back in 1947 with his wife and mother.  In 1946 electricity came to the farm and the dining room was made into a bathroom with indoor plumbing. An electric heater, sink with running wate, and a gas cook stove were put in the kitchen.  Ethel stayed on the farm until 1953 when she permanently moved back to Norfolk with her daughter. Ethel died in 1958.

The house had sheltered four generations of Prudens before it was sold with the farm in 1966 to Dr. Louis Waters.  Dr. Waters made the kitchen larger and added a bedroom and bath. His son, Louis Waters, Jr., and his wife, Debbie, now own the home. In 2010 they made extensive renovations including a large great room, gourmet kitchen and spa bathroom.   (old pic of house).