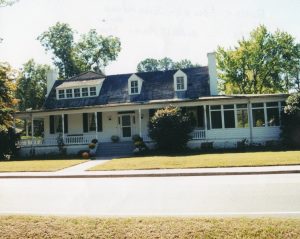 The original structure of the Butts-Powell-Saunders house was built ca. 1780-1820.  Dr. George Washington Butts bought the property at 133 Kings Highway as well as the Butts farm in Nansemond County, adjacent to the Pembroke Plantation.  He was born in Chuckatuck in 1843, the son of Edward A. and Mary Butts.  He graduated from the University of Virginia in 1860.  During the Civil War, he served with the 13th Virginia Calvary.  Dr. Butts graduated from the Medical College of Virginia in 1868.  He practiced medicine in Chuckatuck and served as Treasurer of Nansemond County at one time.  The original Chuckatuck House bought by Dr. Butts was a 1 ½ story dwelling with a side passage and two exterior chimneys.

In 1927, Z. H. Powell, who married Dr. Butts’ daughter, Charlotte, extensively rebuilt the house in Chuckatuck and most of the out buildings as well.  The out buildings consist of a small 2 ½ room office, an outside kitchen with working fireplace, a smoke house, a workshop/woodshed and a double garage.   The remodeled 19th century house is 1 ½ stories of beaded wood construction and a detailed wrap around porch with attached carport and large basement, which dates to the original structure.   There are two shouldered end chimneys, one rear chimney and two gabled dormers.  The plastered rooms are large and spacious with two kitchens.  The Powells installed crown molding and beautiful chair railing as well as hardwood oak flooring throughout the house.  The Powells were kind people and gave their employees fair opportunities.  They also owned a large club house on the Butts Farm property where they held many social gatherings during the summer months.  They rode horses and were always “dressed up”.  They employed servants and a chauffeur.  Their son was George Butts Powell.

There was a water tank on the property which held water pumped from a ram at the artesian well at the Chuckatuck Creek.  Approximately six homes were served water from this source.  Harvey Saunders maintained this water tank system plant and kept it functioning.

The house was bought from the Powells by Robert B. Woods, who sold it to Harvey Saunders Sr. in 1946.  The property is still owned by the Saunders family.   Harvey Saunders Sr. was manager of the Butts farm, for Mr. Z.H. Powell, during the depression, before he moved his family to Chuckatuck.  He worked for Lone Star Cement Co. until his retirement.  (pic of Godwin, Norfleet, Christopher, Butts houses)