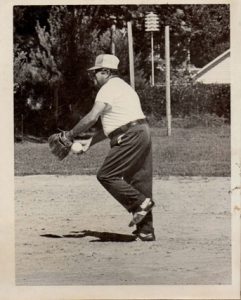 There were a number of basketball teams, called” outsiders”, that played other teams from the surrounding area.  There were both men and women teams made up of those individuals who had played basketball and baseball in high school and wanted to continue this type of activity into their early adult life.  The Greater Chuckatuck Historical foundation has a series of newspaper articles and pictures of some of those teams with names like the Kirk Lumber Jacks and Kirk Lumber Jills.  These two teams were supported by Kirk Lumber Company supplying uniforms and basketballs for their use.  Mr. John Bradshaw and Mr. Freddy Heffington were two of the coaches of a team of ladies that played in the old city market, upstairs, in Suffolk and in Portsmouth at the Armory.  Other local team names were the Chuckatuck Indians and Chuckatuck Alumni.  In 1957 the Kirk Lumber Jacks of Chuckatuck took over sole possession of the Tri-County basketball league.  Players were listed as Chapman, F. Oliver, J. Oliver, M. Winslow, Gwaltney, Moger, and A. Winslow.  These events were well attended and gave the young adults a way to let off steam even in times of bad economic periods as well as the war years.  (Show pictures of the Kirk Lumber Jacks and the ladies being coached by John Bradshaw)

In 1937 a newspaper article mentions an upcoming baseball game between the Suffolk Ramblers and the Chuckatuck Indians.  This would have been the fourth in a five game series leading us to believe this was an outside team.  Starting Pitchers for the Indians were Buddy Horne or Rossie Carr.  In July of 1937 there is another article entitled “Ramblers, Indians to meet again”.  Seems that rain had halted a contest and although the Ramblers scored runs in the top of the sixth inning the game was called while the Indians were at bat with one out.  According to the rules, in such a case, the score would be the last full inning of play which was a 2 to 2 game.  Willard Freeman, manager of the Ramblers, and “Crip” Willoughby, booking agent for the Indians, decided to let the boys settle it on the field.  These two teams continued to play each other in 1938 as well and on July 25 in another article Ernest Hazelwood or Buddy Horne would “toe the slab” (pitch) and Edward Willoughby would be back of the plate (catcher).

In Gloversville just outside of Chuckatuck on the Crittenden road was an African American baseball field.  Just about every Sunday during baseball season there would be at least two games between local teams in the area.  There was no parking area so the road was used as a parking lot.  It is estimated that between the players and spectators there would be 200 plus people in attendance at these events.  What a great way to let off steam from a busy week and spend a Sunday afternoon in the country with a spectacular view of the country side.

A 1940 article in the Suffolk News-Herald on March 23 discussed a basketball game between the City League All Stars and the Chuckatuck Alumni in which the Alumni won 40-35 after trailing in the first half.  The article noted that the game was rough at times.  This writer remembers a ladies’ basketball game in which Dorothy Bradshaw and Ruby Pinner were playing in the Chuckatuck High School gym.  It seems that one member of the other team had taken some liberties with Ruby and the referee had not called a foul.  Sitting on the bench after a time out Ruby told Dorothy to watch what she was going to do to the one who had fouled her.  It was so quick that in the blink of an eye Ruby caused this lady to do a pin (cart) wheel right in the middle of the court landing flat on her back.  Yes, a foul was called on Ruby, but she was smiling as she raised her hand to acknowledge that she had done it.

Adult softball was also a great entertainment with many games being played between local teams during the summer months.  (Oakland Christian Church sponsored one of those teams with names like Johnson, C. Bradshaw, R. Rountree, Tucker, Whitley, Winn, Knight, Mizelle, Saunders, Oliver, and D. Chapman.  Not to be outdone the ladies of Crittenden and Chuckatuck communities played each other and in 1976 Frances Warren, Diane Gayle, Anne Marks Saunders, Arlene Oliver, Linda Glasscock and Lisa Glasscock  were just a few of the many ladies participating.  John Kelly was the coach of this fine team.  Over the years other teams were formed including one which had five members of the Oliver family from Longview, namely sisters-in-law Mary and Arlene, Arlene’s two daughters Theresa and Robin, plus a cousin, Marilyn Oliver.  Among others who played were Marilyn Boyce, Dinah Johnson, Kay Bew, Lynn Rose and Brenda Wright.

In the 1980s there was a Central Baseball League with teams from Chuckatuck (Trotters), Carrsville, Holland (Aces), Norfolk, Wakefield, Portsmouth, Franklin, and Sussex Central.  A newspaper article on June 1, 1986 headlines “Trotters batter opponents”.  They won three games over the holiday weekend with names such as Nelson Turner, Charles Uzzell, Ted Hargrove, Bernard Johnson, Larry Turner, Charlie Bullock, and Gavin Harris.  They played on a field located off Route 10 in the Oakland community for many years.

Additionally, within the city of Suffolk, there were many volunteer-supported athletic associations on record that covered virtually every facet of baseball, softball, football, basketball and cheerleading for kids of all ages and ethnic background.